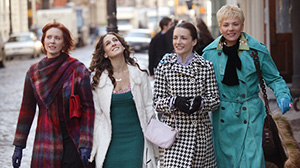 I’m not sure what HIllary’s nomination for President  and the great HBO series, Sex in the City have in common, but images of both float on my TV and in my dreams and yes, you too.

I was up around  3 anxious to get the results of the California primary and Rachel Maddow was right there whenre I left here, on MSNBC with the information.  Yes, Hillary is way ahead and yes,she won most of the others and yes, it’s official and yes, her speech is  wonderful and yes, Bernie is damping down, reducing his staff and heading to DC to meet with O, even if he didn’t move on with class, applauding Hill as the first woman nominee for president.

YES!!!!  We have another chance to stand with Hillary.  Yes, I’m standing with her for both of us.  Trump is burning at both ends and YES,  once again I’ll be working on the campaign, this time for both of us.

So yes, I had all the information I needed but I was energized and sipping a cup of coffee and the bed was made…so…. I switched over in the living room darkness, to my Apple TV and started watching another episode of Season 1, Sex in the City:  Carrie, Miranda, Charlotte and your all-time favorite, sexy Samantha.   I  was never  involved with this series when it first appeared.  Too silly, materialistic, unrealistic, no HBO subscription?  I don’t remember.

But in its last season we started watching together and we liked it.   In fact, you were willing to show up with me when the first movie came out.  You were willing to stand on a waiting line surrounded by bands of women friends, you and one or two other males with their women.

We  were enjoying  it but as it headed to its finish until the screen went blank and we were led out of the theater- FIRE ALARM!!!!!!  The  crowd moved out into the mall area and we moved with it, annoyed and waiting,  but soon we lost patience and left for dinner at our diner.

Back home, I was still frustrated and called customer service to complain. I was told that we left too soon and in a effort to make good on my legitimate complaint we were invited back for another showing the next day.  We opted for a morning time showing- 11AM.  With time for a pit stop at Dunkin Donuts for sweets and coffee we arrived at a peaceful mall and sat through the whole movie this time and we both enjoyed the fun of it.

Searching for that fun, I’ve been binging on Season 1.   I’m loving the band of friends, their lives that are  of course, both fantasy and reality. I’m loving their clothes and their issues as single women…Now that I’m sort of single.  I’m trying on that new skin keeping you close.

How does that sound?

Missing  you T., as we enter a new presidential campaign and new HBO binging…

a motherhood community for moms who do it all