Even though I’m in the throes of jet lag today, I need to create this post before the immediacy of my Edinburgh experience fades, melts away….

I need to capture the uniqueness of the last 10 days of theater with a group who love it as much as I do.

I need to give thanks to the  ultimate drama boy for his insistence that I join him   at the International Fringe Festival in Edinburgh Scotland 2017. Of course I  had moments of cold feet and hesitation after our comfortable  years of traveling. But  I dug out my pre-T traveling shoes hiding out in back of my closet, packed my bags with layers of tops, pants and sweaters, sneakers and rain gear, got on a plane and arrived in Edinburgh just as the festival was kicking into in full swing, just days before Chris’s  play, Enterprise would win a coveted Fringe First  2017 award.

And here’s where we began…

Chris comfortable and in the groove met me at his stage door on day 1, toured me around the Assembly and made sure on that first day that I began to know his inner circle of fellow actors, directors and producers. I was an insider :). And even though I knew my limits on that first night my Edinburgh adventure began.

Mornings were all  mine. Breakfast at 10, just two blocks from my hotel at the Urban Angel where I usually had a  small table waiting, where I could read, write and remembered when I had you sitting across from me.

Back at the hotel, it was just a short taxi ride up to the Mound and beyond until I I felt more grounded or the rain stayed away.  Sometimes I could catch a play while Chris was performing his and then meet up with him and his band  for a meal, a snack or more theater. We were a duo, a trio with Matt and a crowd with Brian, Margarett, David, Jonathan and Adam and Ronnie.

Even though it’s been years since I directed a high school play the love never left me.  As I sat across from Chris and he proudly introduced me as his high school drama teacher, his group  of pros couldn’t believe that we could be friends after so many years, but yes, it’s true. Grown up, married, father of two  Chris(topher),  is that same kid I came to know and love from his 8th grade English; the same kid who took on any part I threw at him with the  same passion and commitment that I had. Of course it was logical that those 8th grade seeds, nurtured and watered over the years would lead us here.

Here’s a story that speaks to those seeds:

Once, when Chris was a senior and we were working on Shakespeare’s “Twelfth Night” there was one reheasal that Chris couldn’t attend.  His father was recieving an award and  of course, Chris had to be there.  Chris let me know with enough time to plan ahead and we rehearsed other scenes.  Reherasal ended and I was just about to close the house when Chris raced in.

“Hey, would you mind?  We have one scene left to block, my yellow stockings scene. Come on, BK.  We have time.”

“Please, I promise I’ll remember the blocking. Just walk through it with me.  Please.”

Was I really going to say no to him?  Together we worked on it. Chris promised to walk Chelsea through it and mark it out in our script book.   Chris had a great sense of Malvolio and even though I was exhausted to the bone, it was that spirit of collaboration that I loved about theater.  Maybe it was right there, that night that I knew Chris would have no cnoice but to find a way to keep creating characters on stages…

7 Plays Knocked my socks off.

6 Productions were beautiful, inspirational and creative.

1 took me back to my Catskill musical past

1 was interesting but not quite ready for prime time

1 sadly, I can’t remember.  4 in one was definitely one too many…

This was not a trip for you Tuvia, but it’s a trip that I know makes you smile for me now, relieved that I’m back in my life… 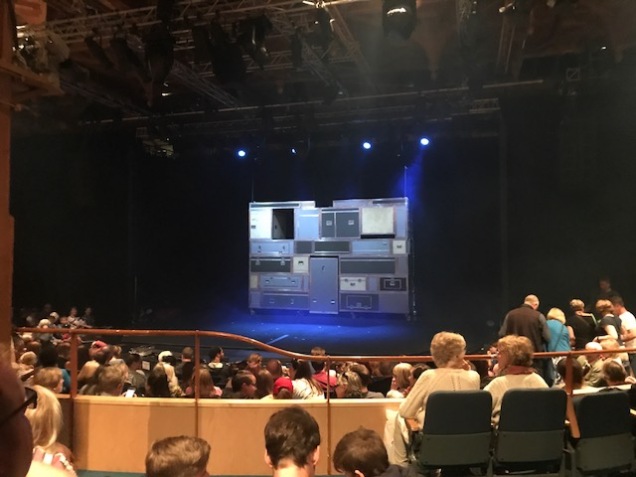